May Fly on the Wall

What's up guys?! It's that time again, time for the fly on the wall, your look inside 8 brave bloggers homes! Come on in and take a look around, and make sure to follow the links at the bottom to check out what my friends have for you.

Let me tell you guys, my life has been super boring lately. I've spent most of the past couple of months questioning if it's too late for coffee or too early for wine? There's just that spot right there in the middle where uncertainty arises.

I actually had one of those mother's days that every mom wants. Okay, scratch that it was the weekend. On Friday I was kid free all day, and went with a girlfriend shopping all day, out for lunch, and then pedicures, ended with happy hour drinks. Then my wonderful brother and sister-in-law asked to take the little diva for the night and most of the next day, so I got TWO kid free days! I relaxed, had breakfast in bed (thanks husband), and then spent the afternoon sitting by the river with friends. Then we had an awesome grilled dinner with other friends, during which the tiny diva was returned to us. We went home and got some good sleep before church and visiting all the mothers in our life! I have my mom and both my grandmas still, and Ben has his mom and Grandma. It was super fun, but tiring!

The Fly has the Flu

The flu swept through south Georgia like the bubonic plague. Seriously. I don't think I've ever been so sick in my entire life, and guess who else was sick? Scarlett, and both us miserable and sick doesn't make for the best combination. Pretty sure Ben got it too, and he had to work, so it's safe to say the fly got it too. Entire schools were shutting down because everyone had the flu, and it was once again some weird strain not covered in the vaccine. 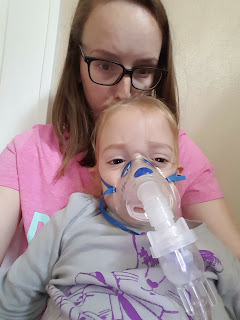 In other news, I'm that kind of busy where you've got so many things to do you lay on the couch and contemplate life and nothing gets done. It's insane, I'm going insane. I feel like I'm constantly running in place, I can't imagine what its going to be like one day when I have two kids.

I also decided to write a novel, as if I didn't have enough to do already. I had this pretty cool story line I had been formulating in my head and let me just say, it is not as easy as it seems. It's really hard to make characters three dimensional, especially when you haven't even named them yet.

I just signed my baby girl up for pre-pre-k. She's super excited to go, she doesn't understand it's not starting until August. I, on the other hand am not so excited.

She turned three in March and we took her to the Zoo in Jacksonville, Fl! It was absolutely amazing, and we got to see one of the tigers napping up close! 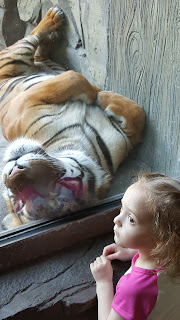 We're clearing land for my mom to move in next to my grandparents. Lucky her, she gets to live in the most beautiful place in the world,but they sure are having to take down a lot of trees. Joel and I couldn't resist a moment to ham it up. We're still the same old Joel and Danielle my momma raised, some things never change. 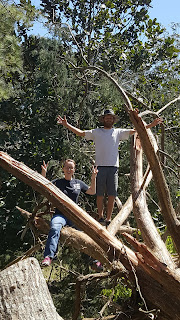 Scarlett decided her beautiful face need make up. She also had so much bronzer on her feet that she was brown! I hated to get chastise her, it was the most adorable thing in the world to me and I promptly moved my make up out of reach. 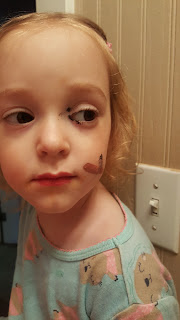 Ben and I done something really painful, but really "adult-like." We put almost his entire raise towards insurance for ourselves, health, dental, vision, and whole life. Adulting is so hard. 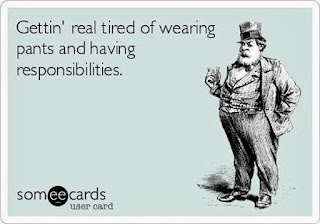 Shoutout to my Samsung S6 Active! If you're like me and always destroy your phones, this one's for you. I dropped it in my oatmeal the other day and took it to the sink and rinsed it off. I'm so obsessed with it and will only use indestructible phones from now on!

Well that's all I've got for you until next time! Buzz around and see what my friends have for you!

I'm Ceraya, and this is the April secret subject swap.

Your “Secret Subject” is:
You found out your family is throwing you a surprise birthday party, how would you throw hints as to what you wanted at the party.
It was submitted by:                http://www.bookwormkitchen.com/

I actually had to consult with my family to make sure my first reaction about myself was the right reaction, and it was. Initially I thought, "I can't keep a secret when I'm excited!"

And they said it was true. Alas, I have a big mouth! I can keep serious thing secret, but when I'm excited, it's all coming out! So most likely the would probably know as soon as I figured out and start calling each other to tell them I knew already.

I would probably start out dropping really heavy hints, asking what they've got planned for my birthday. Telling my husband I really like this food, it would be a nice party food. Sending him color schemes on pinterest and tagging him in outfits and shoes I like on Facebook.

Closer to time, if they still hadn't figured it out, I'd be asking the big questions. Especially if I hadn't gotten confirmation. I'd be acting like I was going to make plans to do some solo spa trip,even though I hate being by myself more often than not. I'm a bit of an anomaly, I'm an introverted extrovert.

With all that being said, I don't think they could keep it a secret from me either. Especially not my husband and grandma, I could probably work it out of them pretty easily.

Here are links to all the sites now featuring Secret Subject Swap posts.  Sit back, grab a cup, and check them all out. See you there:

Posted by Unknown at 6:00 PM No comments:

Febuary Fly on the wall

Welcome to a Fly on the Wall group post. Today 9 bloggers are inviting you to catch a glimpse of what you’d see if you were a fly on the wall in our homes. Come on in and buzz around my house.

I am so sorry! My grandparents got into an accident this week and I've been so busy helping them deal with it, I completely forgot! I've been a chauffer,  insurance adjustor, doctor, personal assistant, and rental car agent all week!

Please head over and see what my friends have for you!

January Fly on the Wall

It's that time again! When you're invited in to take a peek on what 9 brave bloggers have going on in their worlds! Come on in and buzz around!

My word for this month is recovery. We're still recovering, and reeling from 2016. It was a rough year for us all around. Our bank accounts, waist lines, and the organization of our home have all take a beating. It's a disaster area around here.

This will be the first Fly on the Wall that I don't have any humorous anecdotes to share. I neglected to write any of them down, even though I know there were a few very worthy of mention. I've had the January blues this month, I guess. All I've done is sit on the couch and binge watch TV. I've tried to jump start my exercise program again, but to no avail.

I recently got hooked on Shameless. I'm always so late to the party on everything but when I finally take advice on entertainment, I end up sucked in with no reprieve until the story line is finished. Whatevs.

My brother is getting married. And it is like the most stressful thing. I will be so glad when it's over. I'm glad I mostly picked the bridesmaid dresses, because they are totally re-wearable. He wants Ben to wear his dress blues though, and it is costing a small fortune to get them ready, since he hasn't worn them in over 2 years, nor after he ranked up and gained more medals and ribbons while he was in.

We had a positively lovely Christmas together. Breakfast went off without a hitch and Santa brought Scarlett a red and black Corvette she loves to speed around in, too bad she can't steer it!

I also went out for the first time in a year! I forgot how bad hangovers suck when you're old, but I had a great time listening to live music!

Well that's all I have for y'all this time, buzz on over and see what my friends have for ya!

Welcome to the January Secret Subject Swap! This week 12 brave bloggers picked a secret subject for someone else and were assigned a secret subject to interpret in their own style. Today we are all simultaneously divulging our topics and submitting our posts.

The prompt I received was: "What do you consider rude?  Would you make it a crime?  What would the punishment be?

It was submitted by: http://dinoheromommy.com/

I think rude is subjective. Meaning that it all depends on the person. Some people would consider it rude to put your elbows on the dining table, but here in the South, most everyone eats that way. Rude varies from country, culture, and region. Rude is mostly a social concept to define what is considered the "social norm." When you take into account that every person, family, culture, are different, rude doesn't even carry the same meaning.

What I consider rude is being blatantly unkind. I don't care if you chew with your mouth open, forget your ma'ams and sirs, but being unkind is rude. Letting the door slam on the person right behind you is rude. Saying harsh and cruel things about another person is rude.

And then there's the minor infractions that frustrate most everyone, but can they really be considered "rude" by definition? Things like: cutting someone off in traffic, not using a turn signal, tailgating, using the last of something and not replacing it, littering, things that affect all of us? If it affects someone else in a negative manner, its rude.

So where do we draw the line? Simply put, we can't, the line is too blurred. With that being said, it's too hard to classify something so subjective as a crime. Things like "assault" are a blanket statement and cover various types of assault. Same thing with rude, it's such blanket statement that covers various infractions. It would be hard to make the punishment fit the crime.

Here are links to all the sites now featuring Secret Subject Swap posts.  Sit back, grab a cup, and check them all out. See you there:

Welcome to my Chaos!